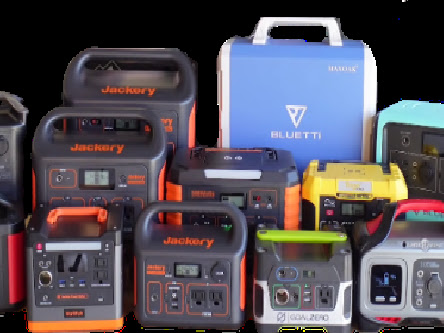 Power stations allow self-sufficient power supply on the road and at home. They include charge controller, battery and inverter and can typically output different voltages, such as USB, 12V and 230V. A power station is easy to use even by technology laymen. If the power station is connected to a solar panel, a mobile solar power system is created.

With the use of a solar module you have a self-sufficient solution (also called solar island system) for power supply in case of power failure or far away from civilization. The power stations are not only popular as an emergency battery with 230V. They are also popular with vets, craftsmen, photographers and journalists to have a mobile power supply.

Often, a power station can also be operated as a UPS because it can be charged and discharged at the same time. In the event of a power failure, it thus cushions the loss of power. For this reason, it is often called a emergency power battery - but it is much more than that.

Despite the fact that fuel generators provide greater power, the cost of fuel is high and not always readily accessible. That is why more and more people are turning to solar generators. Solar generators are tempting because they are environmentally friendly, simple to operate, do not require fossil fuels, and are getting more economical as solar technology improves. Many solar-powered generators are essentially all-in-one portable power stations that can be charged using a solar panel, a wall outlet AC supply, or a car port, ensuring that you never run out of power.

Solar power banks are made with both photovoltaic cells and at least one USB port. By cable, mobile devices such as cell phones and digital cameras can be charged at any time. This gives you the greatest possible flexibility.

However, a test of solar powerbanks shows that there are many different models and brands.

A reliable and efficient solar power station is essential for most households today. There are many reasons for a power outage that can leave your home without electricity for an extended period of time, leaving you without heating, appliances, and sometimes even water. Portable power stations can also be useful for travelers, as they offer the ability to charge devices on the go.

There is a wide range of powerstation to choose from, and it can be difficult to find the right one for your needs. Portable chargers don't get you very far when traveling or away from home, as you may need an outlet to get power. To stay connected, warm and safe while traveling, invest in a portable charging station.

What is a Solar Generator?

A beste Solargeneratoren Test uses the light energy of the sun to generate electricity. For this purpose, the generator is equipped with solar cells, which in turn are equipped with photovoltaic modules. This allows the generated energy to be used to charge electrical devices.

Some generators allow, for example, a direct connection for USB devices, such as smartphones & Co. Others also allow larger electrical devices to be put into operation. This depends on the solar generator, the size of the solar cells and the generated energy.

Who manufactures the solar generator?

There are a variety of manufacturers for the Solargeneratoren. EcoFlow Delta, Dokio, Elecaenta and Jackery Explorer 500 are just a few of the well-known manufacturers of the practical generators. Once you start looking around for the power generators, you will very quickly notice that the selection here is really huge.