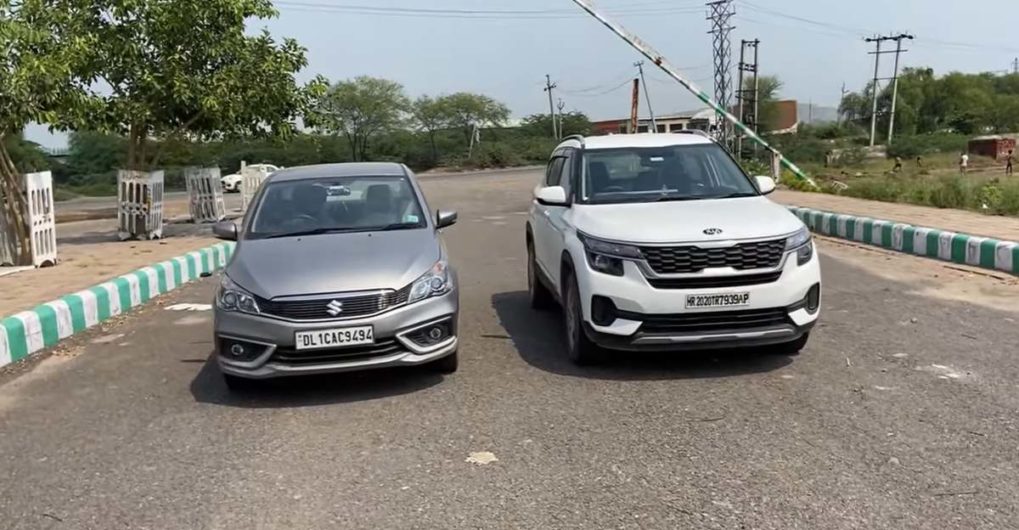 In the past we have featured several drag race videos of SUVs, hatchbacks, sedan and even two wheelers on our website. Most of the time, the vehicles participating in the race belong to the same segment but, there have been exceptions here as well. We have seen videos where higher capacity motorcycle is seen in a drag race with an SUV or a sedan. Here we have one such drag race video where cars from two different segments compete with each other in a drag race. The video show a Kia Seltos diesel SUV and Maruti Suzuki Ciaz petrol sedan in a drag race.

The video has been uploaded by Arun Panwar on his YouTube channel. The video starts with vlogger introducing the cars. The Kia Seltos used here is a diesel engine version which powered by a 1.5 litre turbocharged engine. The engine generates 115 Ps and 250 Nm of peak torque. The Maruti Suzuki Ciaz seen here in the video is a petrol version and uses a 1.5 litre naturally aspirated engine that generates 105 Ps and 138 Nm of peak torque.

The vlogger is driving the Seltos whereas the Ciaz is driven by his friend. The vlogger lines up the car and then they both start racing. Air conditioning on the both the cars were turned off during the race. In the first round something unexpected happened. The Ciaz was running low on fuel and it seems like the owner did not realise it until it stopped in the middle of the race. Then, they refuel the Ciaz and then start racing again.

In this round, the Kia Seltos went ahead and the Ciaz driver can be heard saying that he missed third gear. When the race had started both cars were next to each other and it was only because the Ciaz driver missed a gear Kia Seltos went ahead and won the round. They line up for the next round and in this round, the Maruti Ciaz driver did not miss any gears and won the round by a small margin. The vlogger then decides to do a final round to find out which one of the cars would be the winner of this race.

In this round, drivers switch the cars as well. The vlogger was driving the Ciaz and his friend was inside the Seltos. The race starts and just like the other two rounds, both cars move off the line at almost the same time. Both vehicles were next to each other and then within seconds, Ciaz started pulling away. The Ciaz had won the drag race and the reason why Seltos could not win was because of the weight. The Petrol engines Maruti Ciaz is a lot lighter than the Seltos and that gave Ciaz a better power to weight ratio. The other reason why Ciaz won the race was because of the design. In comparison to the design on Kia Seltos, the Ciaz has a better aerodynamic design which was creating lesser drag during the race.

This Day In Historical past: Spirit Exploration Rover Lands On Mars

Two Methods To Save Large At OPGI Proper Now Vacation20