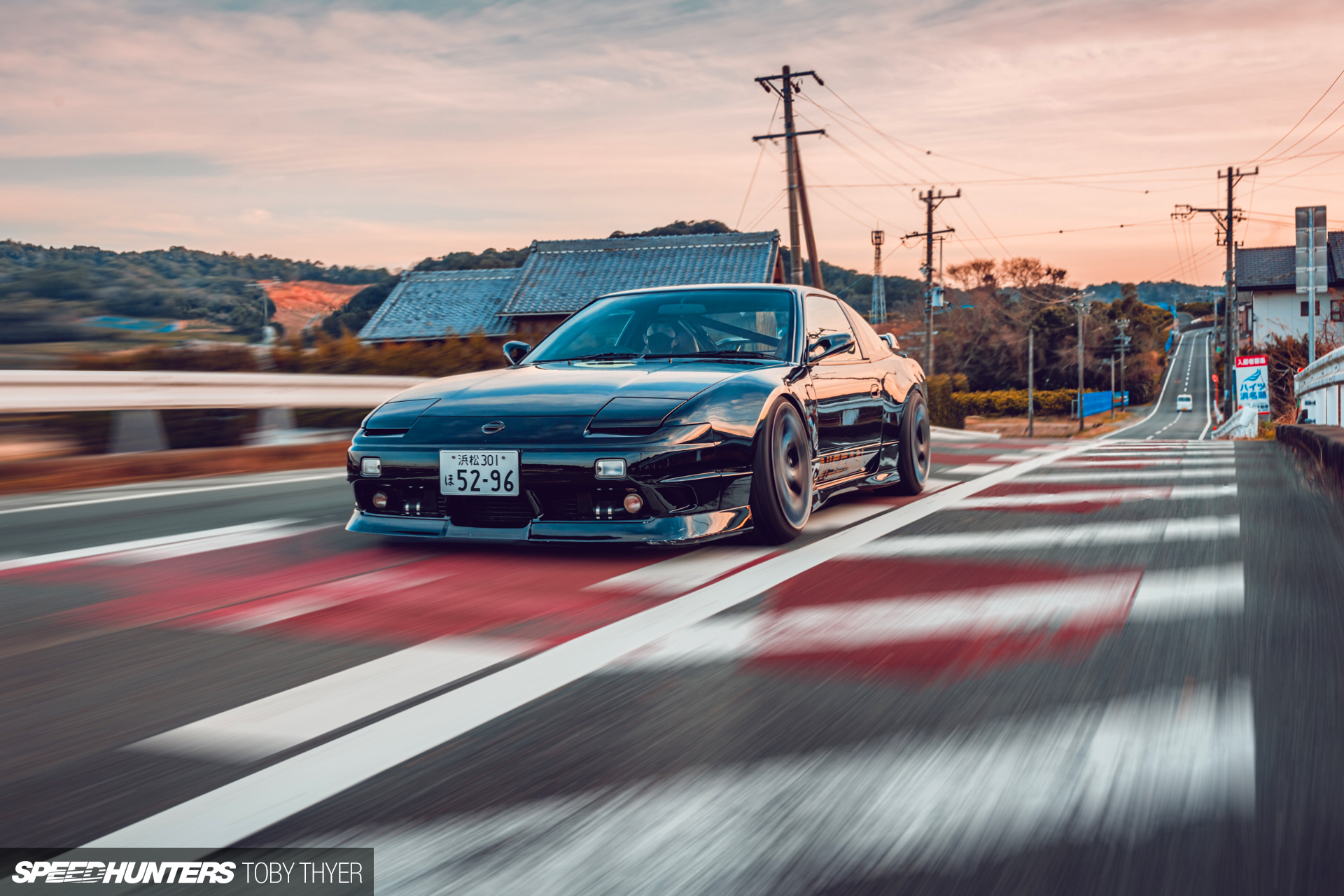 For me, the 180SX is like a pair of New Balance 574s. They come in endless colour combinations, you can wear them into the ground and they still look good, and the 574’s silhouette is instantly recognisable. Although recently, 180SX values have become comparable to a pair of Nike Air Jordans, not 574s.

If the Ishikawa Body RPS13 180SX was a pair of New Balance 574s, it would be a premium all-leather shoe in black with orange and gold highlights. Classy, durable, and both subtle and wild at the same time. The build quality on this thing really is something else. When I visited the shop back in February, I showed you how Ishikawa-san and Makiko-san are building a SR20-swapped Nissan Vanette Largo. The van requires a whole lot more fabrication than this 180SX did, but the process is similar and the skills learnt from the RPS13 project have been priceless for the van conversion.

Makiko-san was at the shop helping with the van build, and when it was time to shoot the 180SX he was handed the keys and we headed off for the mountains. This is orange-growing country, and it did look a bit like Spain or Italy with gentle rolling hills and citrus orchards as far as the eye could see.

As were scouting for a good spot, Makiko-san told me that they used to come drifting along these roads back in the day. The sweeping corners and lack of traffic instantly kindled my imagination of bygone smoky days.

While the 180SX may look like a classy poser with its custom black paint, custom made gold decals and sensual body lines, it drives like a hardened drifter that’s about to slay some rubber.

We found a corner with some space carved into the hillside, overlooking the orchards. Makiko-san lowered the car into its stance position and I took a closer look.

The RPS13 started life as an Type X variant, and while much of the original look of the car remains there’s a lot of work that’s been done to achieve the illusion of a factory-built car.

It’s currently sitting on a set of 350Z Nismo forged wheels built by RAYS, which measure a whopping 19×9.5-inch up front and 19×10.5-inch at the rear. Considering the 180SX came with 15-inch wheels from factory, squeezing on a wide set of 19s required a lot of modifications to the arches. When I say ‘modifications’, I really mean they’ve been completely rebuilt.

If you think the outside is cool, wait till you see what’s under the skin…

This is not the first engine bay that Ishikawa-san has converted into a minimalist work of art. He’s also built an award-winning Silvia convertible which is equally beautiful under-hood.

Beneath the side panels, Ishikawa-san has built a tube frame to house the fabricated larger arches and hydraulic lift kit. While the control unit, tank and pump are from Air Lift Performance, Ishikiwa-san is using sleeved cylinder air cups (manufactured at a local shop) coupled with HKS D’Nob coilovers. Air cups would usually be used to lift the car over an obstacle and then be deflated for driving, but on this 180SX the air cups are used to lower the car when stationary and then pumped up at high pressure for driving. It’s really an unconventional choice for a very unconventional car.

Further into the bay you’ll find a false firewall and a custom strut brace with integrated cowl which hides all the unsightly ancillary items and cabling. The built SR20DET makes 300PS with the help of an HKS GT-SS turbo, and that’s plenty to get the 180SX sideways any day of the week.

Looking inside, you’ll probably notice something a little different. Ishikawa-san has retrofitted an S15 Silvia interior and had it reupholstered in a custom orange (the S15 did originally have an optional orange interior). I like to think the colour choice is a reflection of the orchards surrounding Ishikawa Body, but that is pure fancy.

All that fabrication, lush interior and air-assisted suspension does come with a trade-off though – this drift car weighs in at a healthy 1,320kg. Considering it’s not really meant to be breaking records on track, I think Ishikawa-san has struck a nice balance between performance and comfort.

As night crept in we headed back to the shop, down through the hills and past the orange orchards. The shimmering black body work draped over those giant wheels looks fantastic on the road. The Ishikawa Body 180SX really is a premium build.

Right, I’m off to search Rakuten for some black and orange 574s…

More stories from Japan on Speedhunters

Daimler Is Simply Going to Be Mercedes-Benz, Says CEO